Story of our company

Ken Kee was established in 1960 as a small family business. Back then it used to be called “Ken Kee Groundnut Factory”. After years of transformation, growth, and improvement, in 1998, the company became a private limited entity called Ken Kee (M) Sdn Bhd.

Ken Kee specialises in manufacturing and processing a wide range of nuts and bean products. Our products are marketed and sold under the brands “Kenkee 1960” and “Kow Kow”.

In 2018, Ken Kee (M) Sdn Bhd and its subsidiaries have been acquired by Synerchem Group. After reorganising and restructuring, Kow Kow products are given a brand new logo and packaging design to continue to be relevant in today’s market.

Story of our logo

In the 60s, Ken Kee did not even have a logo. Our founder only focused on making the best groundnuts and did not think a logo was important.

One day after much persuasion by friends, our founder went to register a logo at the registration office without even having anything. He was then referred to a local designer of Indian descent.

The designer, who was a Hindu, made a logo with two cows. Cows are sacred animals in Hinduism, and the designer wanted to bless the company with only the best intentions. Our founder, who wasn’t even a Hindu, liked it and was touched by his sincerity. So, it became our logo ever since.

In the early 2010s, our 2nd owner wanted to modernise the whole company. The original Ken Kee logo was deemed too old school, but he did not want to remove the logo completely out of respect of our founder.

Therefore, a new brand called ‘Kow Kow’ was born. He chose the name Kow Kow because there were two cows on the original Ken Kee logo.

In 2017 after being acquired by Synerchem Group, the Kow Kow logo underwent a major refresh to have a more modernised look.

The logo wasn’t the only thing that was refresh after the acquisition by Synerchem Group. We refreshed our packaging design too. 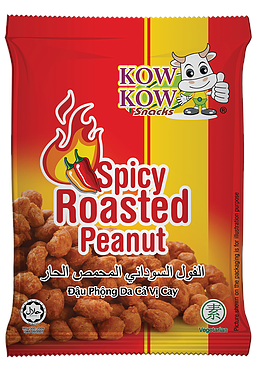